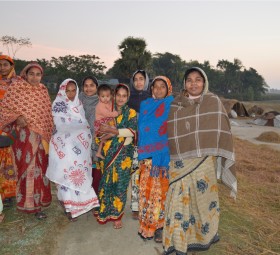 I am back in Dhaka after a whirlwind 9 days of travel, work, and celebration down south in my ancestral village, Katakhali, on Barobaisdia Island. It was a fanstastic experience — better than I could have imagined. I was accompanied by my mother, my daughters,... 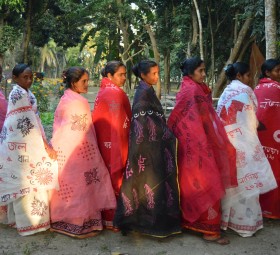 We had a fantastic day of sari making followed by a photo shoot and singing and dancing to celebrate. These women can really move! We have been working very long days to get all the saris and oral histories done. We borrowed a table from... 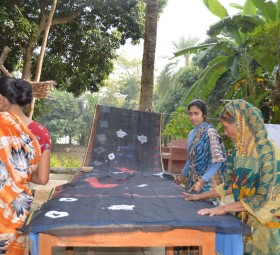 The sari printing has begun and it was incredible fun! We made seven saris collaboratively today. Tuli and Koli played with goats. We have received gifts of papaya, a chicken, and buffalo milk so far. Here are some photos of the sari printmaking. 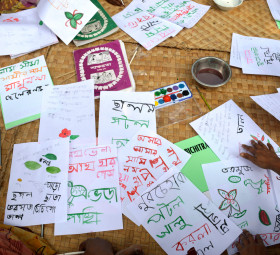 I am writing from Katakhali village, Patuakhali. I have met all the women in the Samhati program and the Her Words project work has begun with 12 of the women. So far we have met to discuss the project, started the oral histories and each... 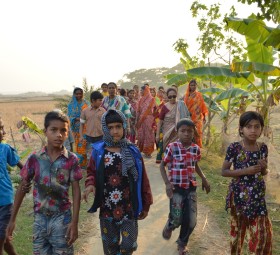 We made to Katakhali yesterday afternoon, arriving at around 4:30 pm. We were on the very slow local ferry for about 19 or 20 hours (quicker than the usual 24 hours due to strong river currents). The last stop was Rangabali, the neighbording island. Then... 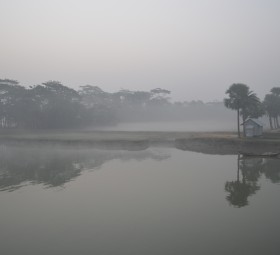 On the overnight ferry (“launch”) now. My portable modem is working and they have electrical outlets to charge my stuff! Nandita and I are planning out our strategy for documenting the project with photo and video. 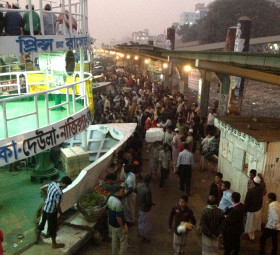 We are in Dhaka, Bangladesh and leaving for the ferry terminal very soon to start our journey to Katakhali. It will be approximately 24 hours by “launch” ferry boat to Rangabali Village in Choto Baishdia Island. Then we will take a smaller boat to Barabaishdia... 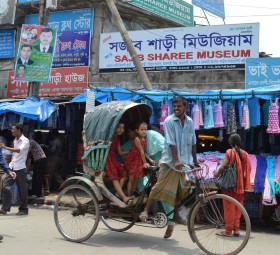 We made it to Dhaka, Bangladesh last night after more that 24 hours of travel door-to-door from Washington DC. Wonderful to finally be here! Cool, sunny weather here — I am wearing a shawl as it is colder than usual. Spent a productive day buying... 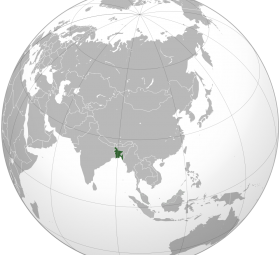 I am leaving for Bangladesh Saturday to work on “Her Words: Storytelling with Saris.” Thanks for all the interest from people all over the globe in helping to photograph/film the project. I am excited to announce that Bangladeshi filmmaker Nandita Ahmed will be working with... 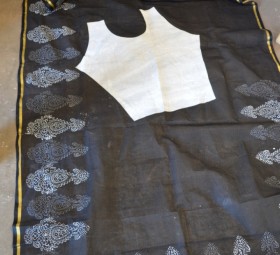 Exhibition premieres in September! I have some exciting news: the Her Words project will be premiered in the opening Fall 2013 exhibition (September 9 to October 19, 2013) at the beautiful gallery of the Gateway Arts Center, Brentwood Arts Exchange, in Brentwood, MD just outside...