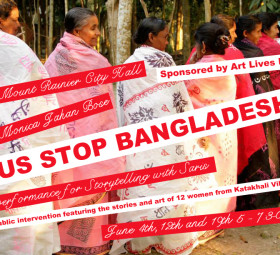 For Immediate Release from Art Lives Here: BUS STOP BANGLADESH is a three-part public intervention held on June 4th, 12th, and 19th from 5 to 7:30 pm outside the bus stop at Mt. Rainier City Hall featuring the stories and art of 12 women from... 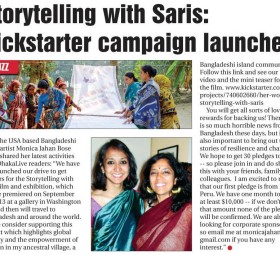 Our Kickstarter campaign in Dhaka News!

Our Kickstarter fundraising campaign is in the DhakaLive Section of the Independent Newspaper in Bangladesh! 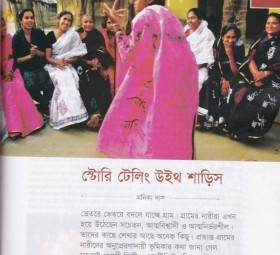 A three-page article about Storytelling with Saris has just come out in a leading women’s magazine in Bangladesh called Annanya. The article is in Bengali and describes the collaboration and the trip to Katakhali in great detail and includes several photos. The article starts with... 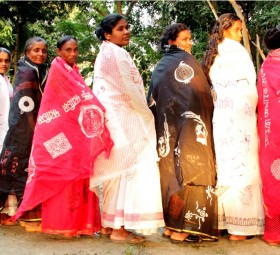 Launch of film trailer and Kickstarter!

Nandita and I have been working hard on the trailer for the film and an appeal video for Kickstarter. Here is the link to both videos and our Kickstarter page. Please watch it and pledge your support and tell your friends! Thanks so much! Monica... 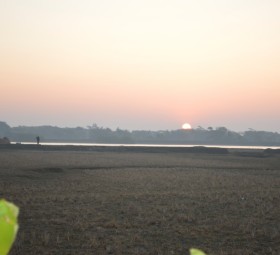 I just spoke with our friends in Katakhali. Cyclone Mahasen in coastal Bangladesh caused a big storm in Katakhali during the last 30 hours. Thankfully, all the villagers took shelter in the Samhati Health Center and no one was hurt. However, there was extensive damage... 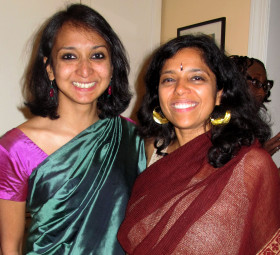 Nandita and I have spent two days this week (first in New York and then in DC) working on a video for our Kickstarter campaign. Then we had a Spring Sari Party to Celebrate Storytelling with Saris on Saturday May 4 at my home in...