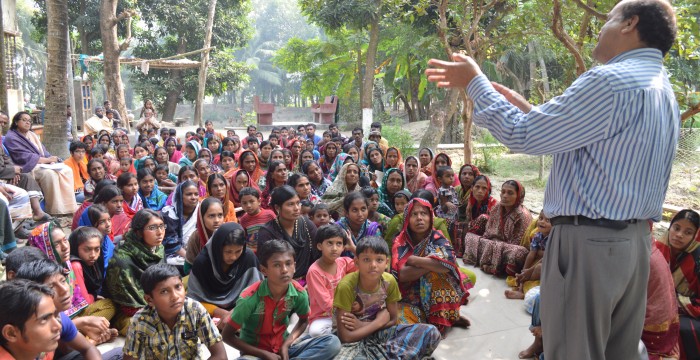 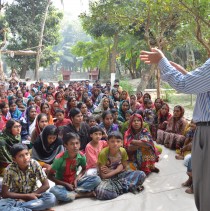 On December 30, 2015, we held a Climate Change Knowledge Sharing Workshop for the greater community in Katakhali Village, Barobaishdia Island, Patuakhali District. We invited the whole community to the workshop by phoning key persons and asking them to spread the word. We asked the primary school teachers to bring the children at noon for a childrenŌĆÖs workshop. Middle and high school children were invited to come with their parents at 9 am since their school was not in session. The tiny preschool kids also joined (preschool is usually from 10 am to noon). We invited the local political representatives as well as men in the community. About 70% of the adults who attended were female. We had at least 140 persons in the main session and about 65 children and their 3 teachers in the afternoon session. So, the total attendance was over 200 persons.This is a very large gathering considering that the village has only about 2,000 inhabitants.

I have been planning this workshop for a long time with Sarder Shafiqul Alam of the International Centre for Climate Change and Development (ICCCAD). I met Saleemul Huq of ICCCAD in 2014, and he spoke at the opening of my exhibition ŌĆ£Her Words: Storytelling with SarisŌĆØ in July 2014 and introduced me to his amazing team, including Sarder. Sarder is from Barisal, a nearby coastal area of Bangladesh, and has a wealth of knowledge on climate change, gender impacts, and adaptation, and has done workshops for thousands of people, including coastal communities in Bangladesh and abroad. He has attended several of the COP meetings for the UN Framework Convention on Climate Change. The day before the community workshop, I prepared the women of Storytelling with Saris for what would be discussed by explaining a little bit about the science of climate change and the recent agreement at Paris at COP21, the 21st meeting of the Conference of Parties under the UN Framework Agreement on Climate Change.

The workshop began with me introducing myself briefly as as the granddaughter of the late Johora Begum, on whose courtyard the meeting was held. I explained that I came to the island in 2013 and found that many of the villagers complained about the hardships they had suffered due to repeated cyclones, changing weather, and failing crops. I introduced Sarder Shafiqul Alam as an expert and researcher on climate as well as a brother from Barisal, who had traveled over 24 hours by ferryboat from Dhaka to be with us.

Sarder then took over and was incredibly, warm, engaging and effective in his presentation and discussion with the community. He used a white board to draw the environment of the village ŌĆö the sun, the trees, the ponds, the rivers, and homes. He got the villagers to explain how the sun gives us light and warmth and the earth revolves around the sun. He explained the difference between ŌĆ£weatherŌĆØ and ŌĆ£climate.ŌĆØ While the villagers are not used to thinking about climate, they are very much aware of the weather. He said that ŌĆ£weatherŌĆØ describes the temperature and precipitation and wind during a short period (such as a day or a week) and in a small area, such as a town or a village. ŌĆ£ClimateŌĆØ or Jalobayu, on the other hand, describes changes in weather over a greater period and over a greater geographic area. 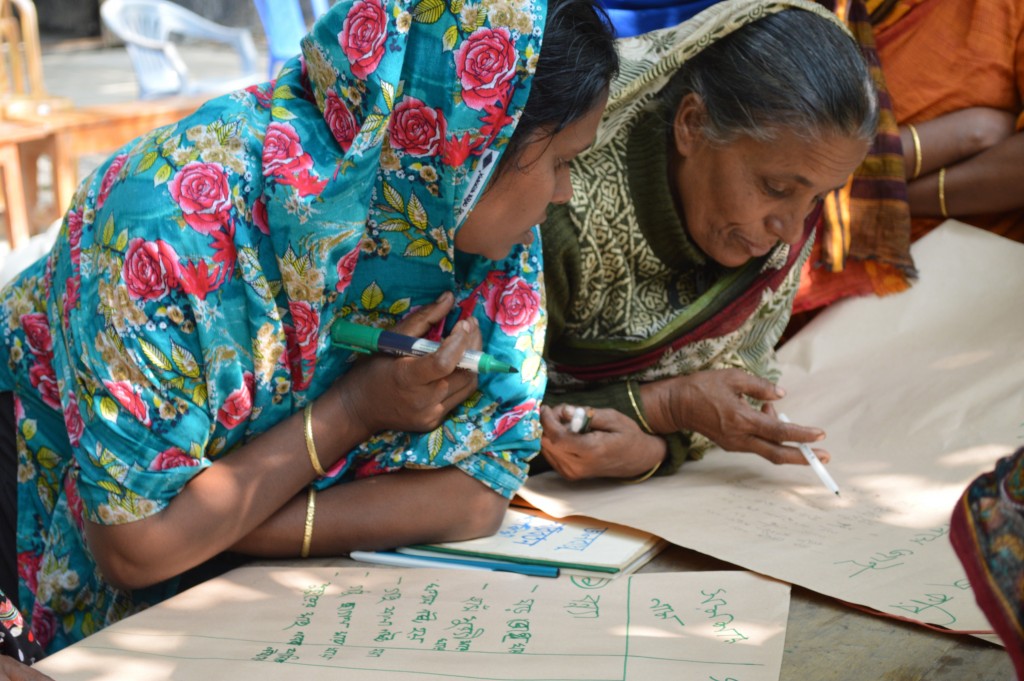 He asked the villagers to explain whether or not they have seen any changes in the weather over time or in the seasons. The villages volunteered that they no longer seem to have six seasons as is traditionally understood in Bangladesh. The seasons of Sharatkal and Hemontokal (Autumn and Early Winter) are no longer experienced in Bangladesh, and all that is left is Summer, Rainy Season, Winter, and Spring. The villagers also stated that they now experience rain all year round, even in winter, which was never the case before. They also said that temperature is generally much warmer than before and that they often experience extreme drought in the summer. The villagers also said they have experienced more frequent cyclones and storms.

When asked if they had any problems as a result of these changes, the villagers reported difficulty with farming due to the weather changes, because extreme heat kills plants and too much rain floods them. Rain during the winter growing season also hampers the usual growth cycle of the winter vegetables. They also stated that the cyclones and storm surges added salinity to the soil and decreased agricultural yield.

Sarder explained that Allah has given us everything we need ŌĆö the sun, rivers, ponds, trees, animals, and fish, but it is the job of humans to protect the environment going forward. He explained that scientists have found that the world is warmer than it used to be. He said that the world has a ŌĆ£fever.ŌĆØ He asked what the villagers do if a person has a fever, and the villagers volunteered that they pour cool water on the personŌĆÖs head, they put a quilt on the person, and they use fever medication. Sarder explained that the extreme storms and rain that are being experienced are a way for the earth to try to adjust and cool itself down in reaction to the rising temperatures. He explained that the worldŌĆÖs fever is as a result of too much fuel – such as coal or oil ŌĆö being burned by richer countries and richer people in poorer contries and that the villagers have not contributed a lot to the problem. He explained that people tend to want more and more and are over-consuming and burning too much fuel, which leads to pollution and warming of our planet. He said that some people also believe that the sea level is rising rapidly and may engulf a lot of coastal land, but that the changes are not going to happen overnight but will occur gradually. He further stated that while the problems are primarily caused by other countries, the harms will be felt by coastal people in Bangladesh. Bangladesh does not have the money to solve the problem, but we can use our brain and hard work to tackle the issue.

I presented to the villagers the saris covered with climate pledges that have been made by people in Washington, D.C. and Philadelphia. The pledges were translated into Bengali for the villagers and read out loud. I explained that Americans are more responsible for climate change and many are trying to change their lifestyles to help people in Bangladesh. The villagers were incredibly touched by the saris. I also explained that 196 countries, including representatives from Bangladesh, got together in Paris and agreed to work to try to keep the temperature of the world from not increasing more that 2 degrees Celsius, and hopefully no more that 1.5 degrees. But that it would take a lot of work and not just promises to solve the problem. I explained that many people are biking now in DC instead of driving and that I am hopeful that boys and girls in the village will aspire to getting bicycles in the future and prefer them over motorcycles.

There was discussion about strategies the villagers are using to adapt to the changes and to avoid loss of life and property during cyclones. The villagers separated into smaller groups to brainstorm about ways to tackle specific climate problems, writing their ideas on large pieces of paper.

The feedback from the villagers on the workshop was overwhelmingly positive. They said they came away with a feeling of “peace” because they had so much wanted to talk about what was going on and were happy to have people from outside the island also show interest in their concerns and were pleased to get more information about why the climate is changing.

On the following day, I held a meeting with the Katakhali cooperative women to answer any questions they had and help them prioritize next steps. Among other initiatives, the cooperative is planning to start a nursery for coconut trees and plant many trees in the village to help protect against climate change; they will also petition the government to help rebuild the levee which protects against storm surge; they will also prepare ahead of the cyclone season by burying underground rice, lentils, and water (wrapped in plastic). 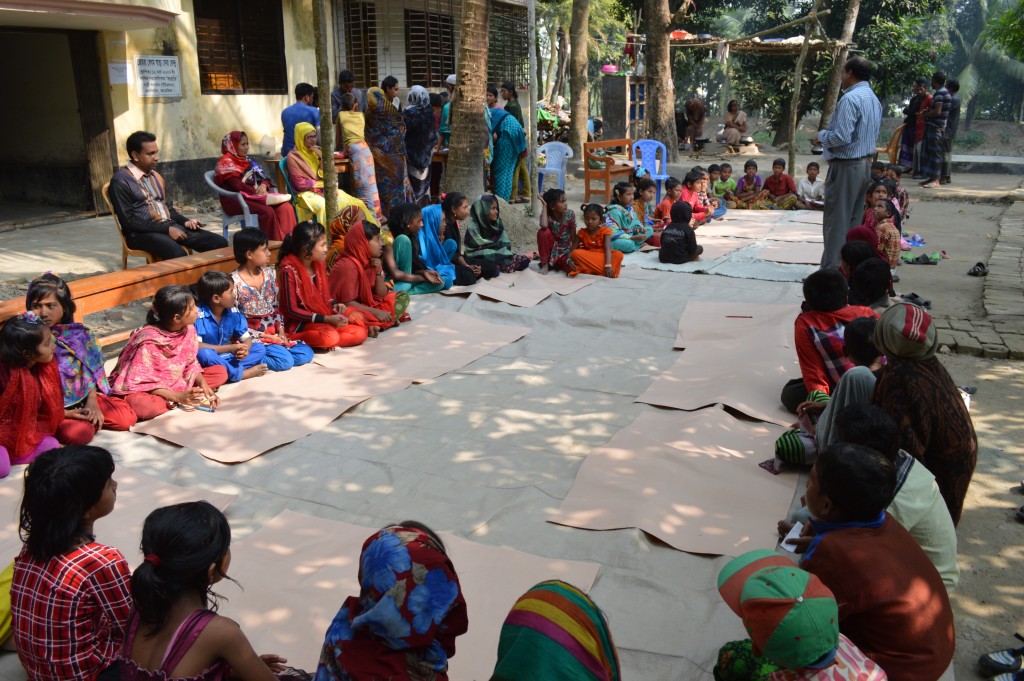 Many thanks to Mahmuda Lina and Matoara Islam for the outreach work to the community for this workshop. We are indebted to Sarder Shafiqul Alam and the International Centre for Climate Change and Development for making this very critical and useful discussion possible. Special thanks to my daughter Tuli Bennett-Bose for taking notes. We are grateful to the villagers for taking several hours out of their day to join us at this workshop during the busy rice harvest season. 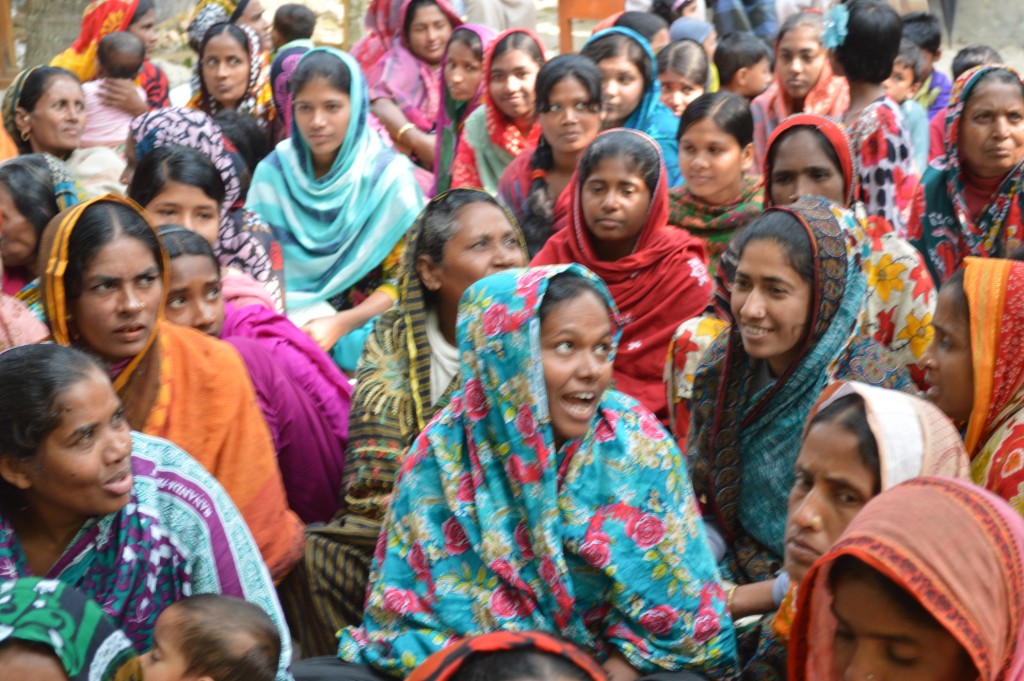 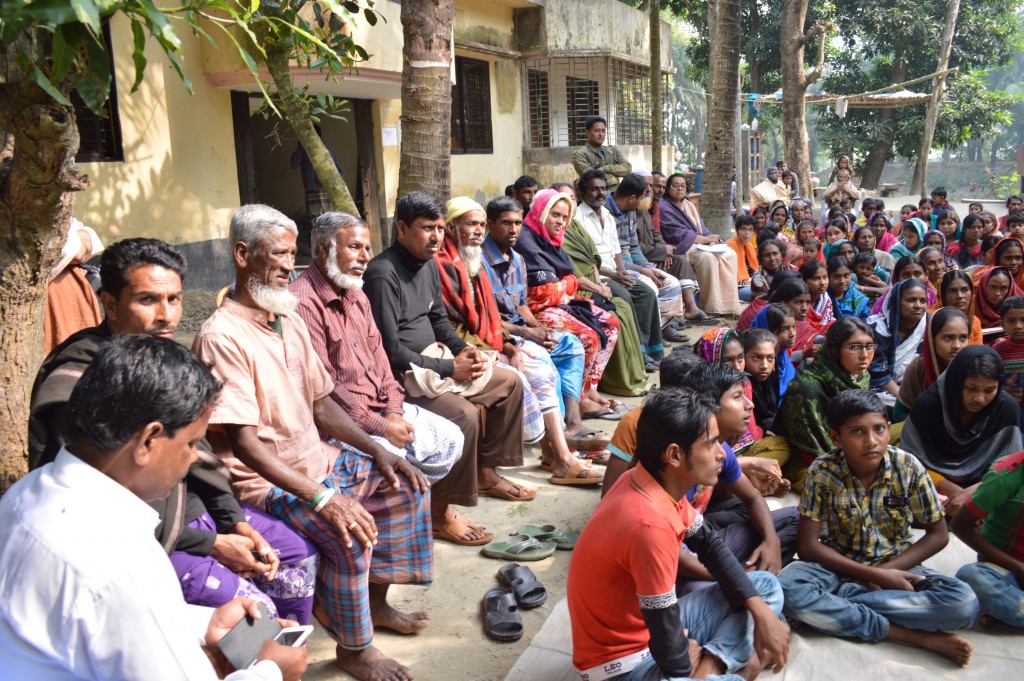