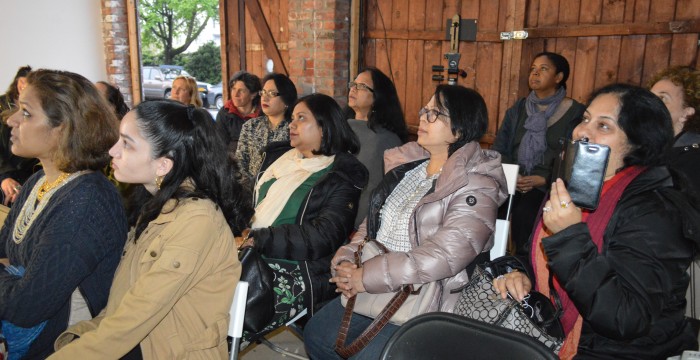 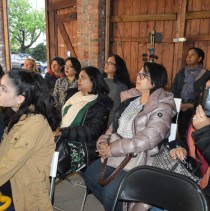 I’m on the Amtrak train home to Washington DC, after a truly heart-warming evening in Brooklyn at Open Source Gallery, where I was engaged in adda and conversation with so many incredible people from 6 pm until late into the evening. Several women from the Bangladeshi Ladies Club joined me at Open Source Gallery (in South Slope, Brooklyn, near Prospect Park) for a discussion at 6 pm, prior to my scheduled gallery talk at 7 pm in conjunction with my upcoming show, “Seven Minutes on the B67.” Most of the women came from Kensington, which is just a few stops away on the B67 bus. None of them had previously been to Open Source Gallery. I learned more about the Bangladeshi Ladies Club, which was formerly known as the Brooklyn Ladies Club but changed its name after a number of women joined from Queens. The group began two years ago and meets monthly to discuss various issues, ranging from health, domestic violence, and the arts. As the gallery filled up at 7 pm, our ladies’ club adda included everyone in the gallery, a wonderful exchange between neighboring communities.

Before beginning my talk, I showed my video piece “Floating/Drowning,” based on my December 2016 performance in Miami with One Billion Rising. I spoke about my attempt to work with various communities — and to build community — around art projects on climate change. I believe that if we are more connected with our neighbors and with people across the globe, we will be able to understand the plight of our planet and build solidarity to address climate change. When I do an art project in a different community, I meet many artists and environmental activists and learn a lot about environmental issues in that community. Yesterday I learned that in New York City, a huge source of green house emissions is the excessive heat used in the winter in apartment buildings, which typically have their boilers and steam-pipes going at high settings, while residents have to open their windows to cool down their apartments. What a terrible waste of energy that needs to be addressed! I also learned about the incredible Billion Oyster Project from my college studio-mate Sarah Porter. Oysters are being placed in the coastline of New York City to clean the water and build a barrier to protect against storm surge.

We also discussed the need to feel hopeful and empowered to address climate change. Some people are feeling hopeless and are even deciding to not have children because they don’t want to raise children in a world devastated by climate change. Especially during this difficult political climate, we need to find time for conversation and connection, to not feel despair. Connection leads to feelings of wellbeing and empowerment, the ability to move forward. We have to feel the power to engage with our communities to bring about change and reduce our use of fossil fuels, moving toward a lower carbon lifestyle. Collective hands on art is also a source of healing and empowerment.

I asked everyone for feedback about the final community performance for the show, which will take place at the closing event on June 29. One of the ideas discussed with the Bangladeshi Ladies Club was for me to join the women in Kensington to take the B67 bus together to the gallery, perhaps carrying a sari. We also had some great ideas from Ifti Chowdhury, who is part of a group called the Royal Bengal Tea House, which uses music, culture, and food to create community. Some visiting curators from Canada also suggested creating a happening around tea perhaps with the World Tea Party social sculpture project. Many other great ideas were shared, and I will follow up with people to come up with the script for the final event on June 29. But before that, we will have the exhibition opening reception on May 22 (7-9 pm) with a community iftar in the gallery.

I am really grateful to everyone who came last night. It was wonderful to meet so many new people from Brooklyn and beyond, and to see many old friends from different parts of my life, from Wesleyan, from Columbia Law, from my years practicing environmental law, from SAWCC, and even from Paris! Special thanks to Open Source Gallery and Arts & Democracy for co-presenting this project and inviting me back to Brooklyn.

LINK TO RECORDED LIVESTREAM OF TALK/DISCUSSION.