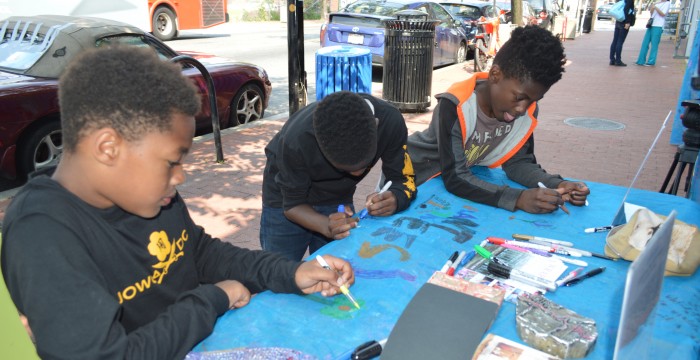 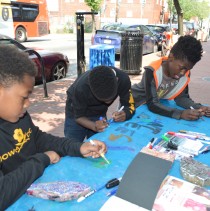 WRAPture is a wrap! After 8 months and more than 25 workshops and meetings in DC and Bangladesh, working with over 200 people, we have completed the project. We draped five buildings in Anacostia DC with over 60 saris on three separate days in April and May. And there was poetry too. It was all about climate change and community. Thank you to everyone who’s been a part of it and to everyone who came yesterday. Yesterday was really tremendous and for our finale we drew and wrote on a sari on the street and spoke out in the street about climate change so that everyone could see and hear us.

We were installing all day while Charlie Weber of the Smithsonian Magazine filmed and interviewed us. He even climbed onto the roof! Dozens of children and local residents came out to see what we were doing and to read the words on the saris and look at the imagery. We had one sari laid out on a table on the sidewalk and many people joined in drawing and writing climate pledges on the saris.

The weather was perfect — sunny and 82 degrees Fahrenheit and very little wind, just enough to move the saris a bit. We met with so many people in the neighborhood, and lots of visitors came from other parts of DC and even from Maryland and Virginia. Because it was Saturday, people were more relaxed and children had plenty to time to talk to us about climate change.

There were several highlights for me yesterday. It was super to have so many of our WRAPture participants come out and see the installation. There were also three young Bangladeshis that came out to see the installation — and these were people we had just recently met. I was also thrilled that my mother, writer Noorjahan Bose, was able to be there. She just arrived from Bangladesh a few days ago and my wonderful friend and neighbor, Cintia Lombardi, brought her. We had an open mic on the street starting at 4 pm and though many of our poets felt shy to speak on the street, artist Maps Glover surprised us with a wonderful poem that he wrote himself. We also heard from Project Manager Amy Lokoff, Dominic, Jini, and Philip Mecham. Philip and his partner Andre Pellerin are deaf and have been active in the project from the very first launch meeting in November. We have provided sign language interpreters, and Philip and Andre participated in numerous workshops. Philip had previously said he didn’t want to speak publicly, but yesterday he decided to speak out in the street and spoke so eloquently in sign language through an interpreter. He talked about how important the environment is to him and what he is trying to do to protect the earth. His words were incredibly moving. I hope we captured it on video so we can transcribe it.

At 5 pm we moved inside for some refreshments provided by our host, the Anacostia Arts Center. We had a slide show of the sari workshops playing inside. We were very fortunate to have Lauren Glover of the DC Commission for the Arts and Humanities there with us for our closing (as well as for our first day on April 4). The project was funded by the Public Art Building Communities Grant, and Ms. Glover spoke about the importance of art in building community and stated that WRAPture was a different, new kind of public art project, and that the Commission was excited to support it. We were all moved when my mother Noorjahan spoke about growing up in Katakhali Village and that her mother inspired her to create an eco-empowerment cooperative for the women there. In 2013, I recruited a dozen women from that cooperative to be part of Storytelling with Saris, and most of the original members are still active in the project. Karen Baker, the media and design strategist for WRAPture, was the last person to speak. I am grateful to her for all her beautiful design work and leadership on this project.

We finished deinstalling at close to 9 pm. On my way home, I was interviewed via phone by Prothom Alo about WRAPture and our final day. Amazingly, they published the piece by morning.

Huge thanks to to everyone who came yesterday, to our hardworking installers, Zoma Wallace and Korey Richardson, to Amy Lokoff for being there from the beginning and for every workshop and event, and to Maps Glover for managing the soundscape and engaging with so many people yesterday. Endless thanks to the whole WRAPture team in DC and Bangladesh and to the DC Commission on the Arts and Humanities for making it possible for me to realize this idea.