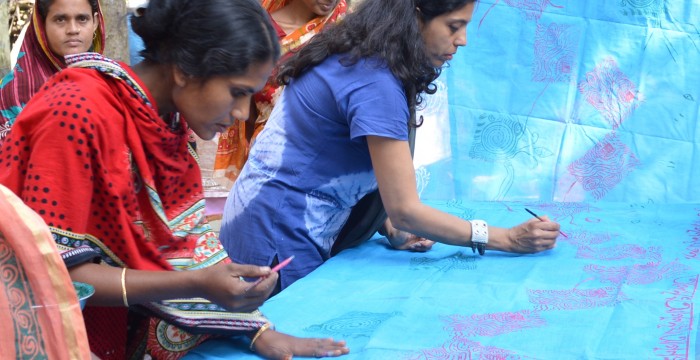 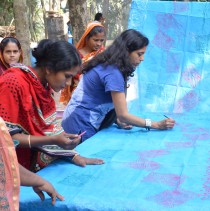 It was a huge pleasure to work with Hawa and Shima on this blue sari with undulating waves. Hawa and Shima and other women of Katakhali Village taught me woodblock printing in 2012 and 2013. I recently designed a new set of woodblocks about climate change and renewable energy. I returned to Katakhali in December 2015 and we used these new blocks to create a group of blue and green saris about climate change.

I worked on this sari, “Flood,” with Hawa (her name means wind) and Shima, who I met in 2013. They were willing to make a non linear undulating pattern on this sari with my woodblocks depicting waves and a village being swept into a storm. The border on the bottom says “flood” in Bengali. The word on the right is “Agunmukha,” (literally fire mouth) which is the name of a massive river near Katakhali where several rivers meet.

Both Hawa and Shima are farmers and multiple cyclone survivors. Hawa and her husband have a small tea shop in the village. Shima lives right on the banks of the Darchira River and is particularly vulnerable when there is a storm or cyclone.

Previous : [ Reflections on RISING in Philadelphia ] • Next : [ A Solar Power Sari ]