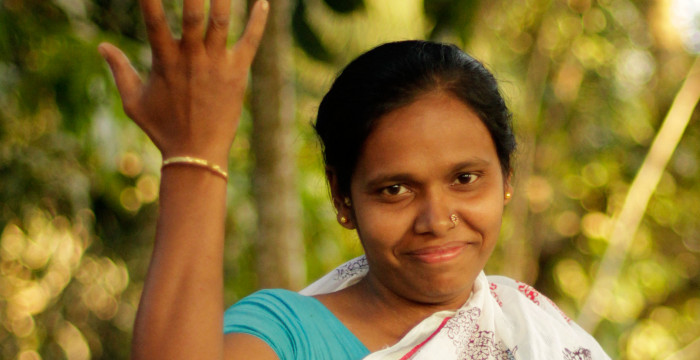 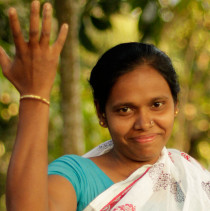 Nasima was born in Golachipa in approximately 1988 to a family of 4 children in total. She went to school up to 9th grade. She got married in 2003 at age 15 and moved to Katakhali to live with her husband, Rana. She has one child, a boy called Hasif Rana (born approximately 2004). In 2013, she said she hoped to have a second child. She had a daughter, named Hasbiba, in 2015.

After cyclone SIDR, she took shelter in the Health Center. Her home was destroyed. Samhati built her a new home and deeded it to her. She joined the cooperative after SIDR and has been taking literacy classes as well as classes in sewing, farming, and woodblock printing. She is reading much better now and can tutor her child. She really enjoys reading novels. She also writes letters to her mother and relatives. Her mother can also read. Nasima has purchased a sewing machine and earns a living as a tailor. Nasima is a wonderful, spirited dancer.

Nasima lives in a home by the river and has a small farm where she grows eggplant, chillies, rice, and gourds. Her husband was a boatman and operated a trawler, but more recently started managing and selling rice because of the risk of frequent storms. In 2016, Nasima received an overseas job opportunity to work as a house keeper in Saudi Arabia under a two-year contract. Because her family needed the money, she took the job and calls home almost daily. She has sent money for Hasif Rana to buy a bike. The whole village hopes she returns home safely.