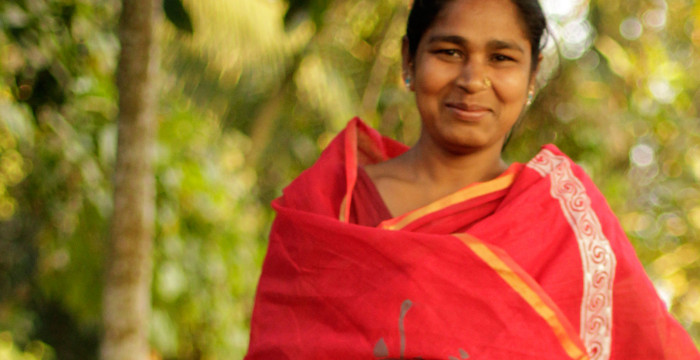 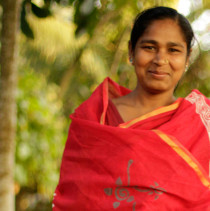 Roxana was born in Katakhali Village in approximately 1978. She was one of four children. Her family was very poor and at age seven she was sent to Dhaka to work for a family. She never went to school but spent her days washing the employer family’s clothes and helping out with housework. The employer did not pay her but gave her new clothes every year and paid for her wedding. At age 17, she got married and came back to Katakhali to live with her husband, Fakar. In 2013, Roxana reported three children, a daughter Sharmin (age 16), a daughter Rabeya (age 10) and a son Radil (age 5). Sharmin was a good student on a Samhati scholarship but eloped with a cousin who fell in love with her. Roxana is very unhappy that her daughter gave up her studies so young. Rabeya is in 4th grade and Radil is starting school next year. Roxana’s husband died in 2009 of liver cancer, and Roxana lives on her own with her two young children.

Roxana and her family survived cyclones SIDR and AILA in 2007 and 2009 by taking shelter in the Health Clinic. Her house was destroyed by SIDR, and Samhati built her a new home within three months and deeded it in her name. She joined the cooperative after cyclone SIDR and started the literacy classes. She could not even write her name before, but is now very happy that she can read and write a little. She has also learned fruit and vegetable farming from the cooperative. She grows rice and papayas. She loves being part of the cooperative and eagerly joins all the activities. She moved to Dhaka for several years to work but is now back in Katakhali.