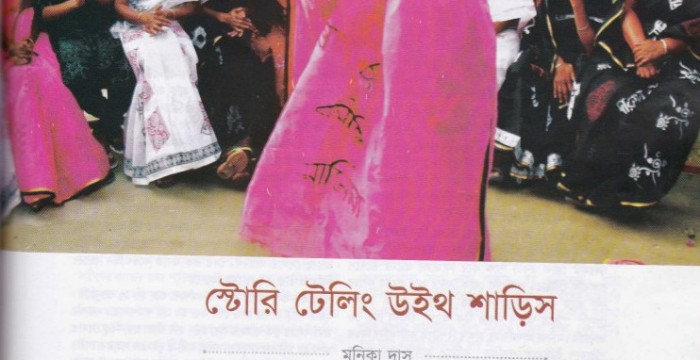 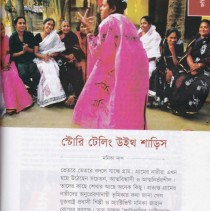 A three-page article about Storytelling with Saris has just come out in a leading women’s magazine in Bangladesh called Annanya. The article is in Bengali and describes the collaboration and the trip to Katakhali in great detail and includes several photos. The article starts with the following quote: “The village is changing from the inside. The women of the village are now enlightened, self-confident, and empowered. There is much that we can learn from them.” I actually learned about the article when I called one of the village women in Katakhali the other day. She told me that they had read the article and were very excited. I then called my cousin in Dhaka and asked her to scan and send it to me. Very happy that the article is in Bengali so that the women of Storytelling with Saris can read it and be proud of their achievements! (It is essentially an expanded Bengali version of a writeup that appeared in the Independent in English.)

Previous : [ Launch of film trailer and Kickstarter! ] Next : [ Our Kickstarter campaign in Dhaka News! ]
Back to Press