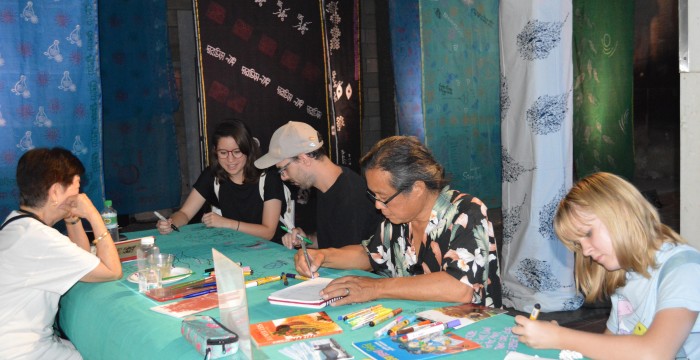 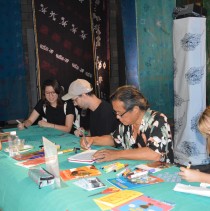 Climate change is destroying the heritage and homelands of island and coastal peoples across the world.  Richer countries of the Global North continue their historic disregard for the cultures, language, land, and even the rights to exist of those they regard as “other.”  RECLAIM highlights language and culture as core components of identity and expression that can serve as tools of innovation and resilience in the area of climate change. Through an immersive video/sari installation, a series of workshops, and a community performance, RECLAIM seeks to inspire and empower viewers to reclaim heritage, language, and our connection to the earth to fight climate change.  Twelve 18-foot-long saris hang vertically like columns in the raw industrial space in the back of the former supermarket, with another sari laid out on a long table for viewers to write and draw on.  With multiple video projections, the dark room is filled with the sound of water and the voices of Bangladeshi coastal women speaking about the impacts of climate change.  Hundreds of visitors learn about the impact of climate change on island and coastal communities and make carbon reduction promises on two Climate Pledge Saris, to be returned to Bangladesh to be worn as garments by coastal women.

Bose uses the hand-woven cotton sari as a storyboard and a recurring symbol, representing the cycle of life, and women’s bodies and lives.  Water is also an enduring theme, speaking to life, climate, sustenance, death, and renewal.

The saris are covered with woodblock images and words about climate change written in Bengali, English, and Hawai’ian. Bose created most of the saris with women from Katakhali, her ancestral village in Bangladesh, which is on Barobaishdia Island in the Indian Ocean.  Other saris were created in collaboration with communities in the U.S. through Climate Sari Pledge Workshops, where participants learn about climate change through art and make specific carbon reduction pledges on saris.  The installation includes two saris that Bose co-created with Hawai’ian language activist, poet, and fabric designer Hina Kneubuhl.  Inspired by the Louis Bourgeous/Tracy Emin collaborative drawings, Bose used woodblocks to print images and Bengali words on the saris in Washington, DC and then mailed them to Kneubuhl, who wrote Hawai’ian poetry in response to the saris and printed them on the saris with silk screens.

One of the saris has a Hawaiian poem printed in a circular pattern, which translates as: “The seas are swelling, the rain is pounding; our government and those most responsible for climate change must steward the earth; if not, the people who are most affected will rise up.’

The two looping videos, an excerpt from the future film“Rising Up to Climate Change” and the performance video “Jalobayu (Climate.Water.Wind.)” speak to the impact of climate change on ordinary people in Bangladesh and the U.S., and community action on climate change through art and performance. The adjacent and complementary installation by Keolopiko (of which Kneubuhl is a member) includes a video about sea level rise in Hawai’i along with text in Hawai’ian language.

Bose also collaborated with Hawai’ian cartoon artist Sloane Leong to create a zine,“The Story of Mother Tongues in Hawai’i and Bangladesh.”  The 12-page illustrated zine looks at the suppression of Hawaiian language in Hawai’i after American annexation and the suppression of Bengali in East Pakistan (now Bangladesh) after partition of India, and the revival of mother languages around the world.  The zine was shared with visitors as part of the workshops on language and climate change. 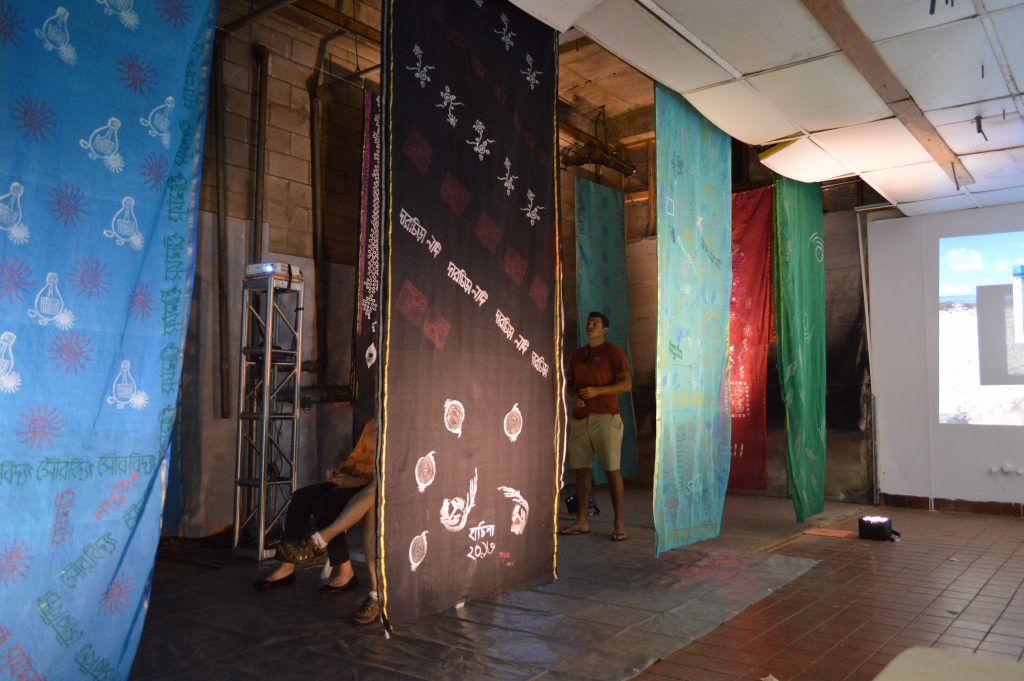 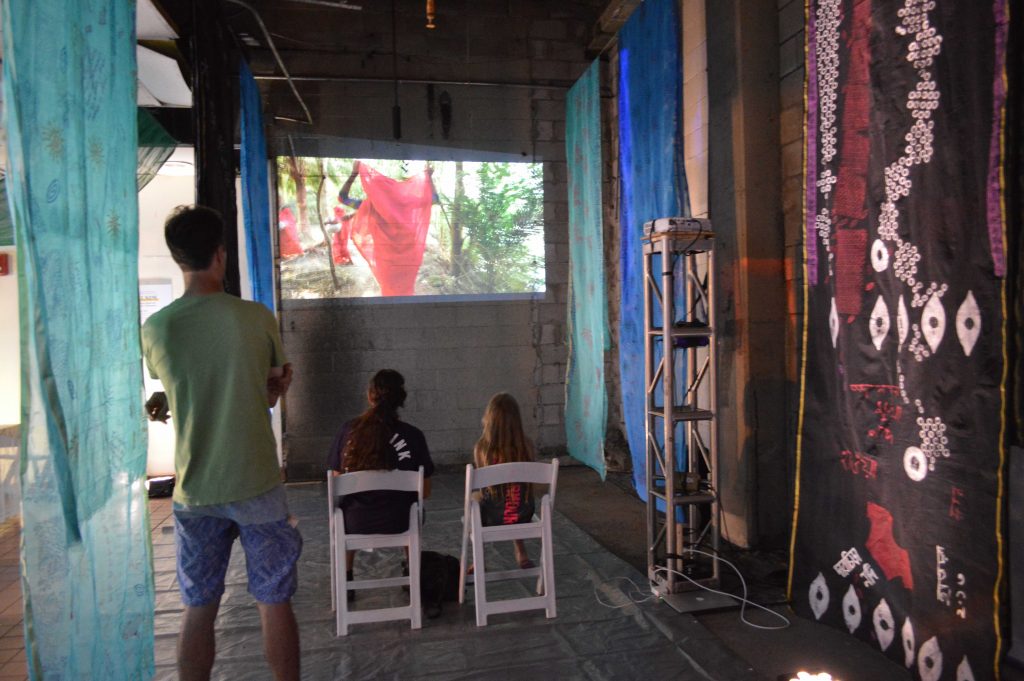 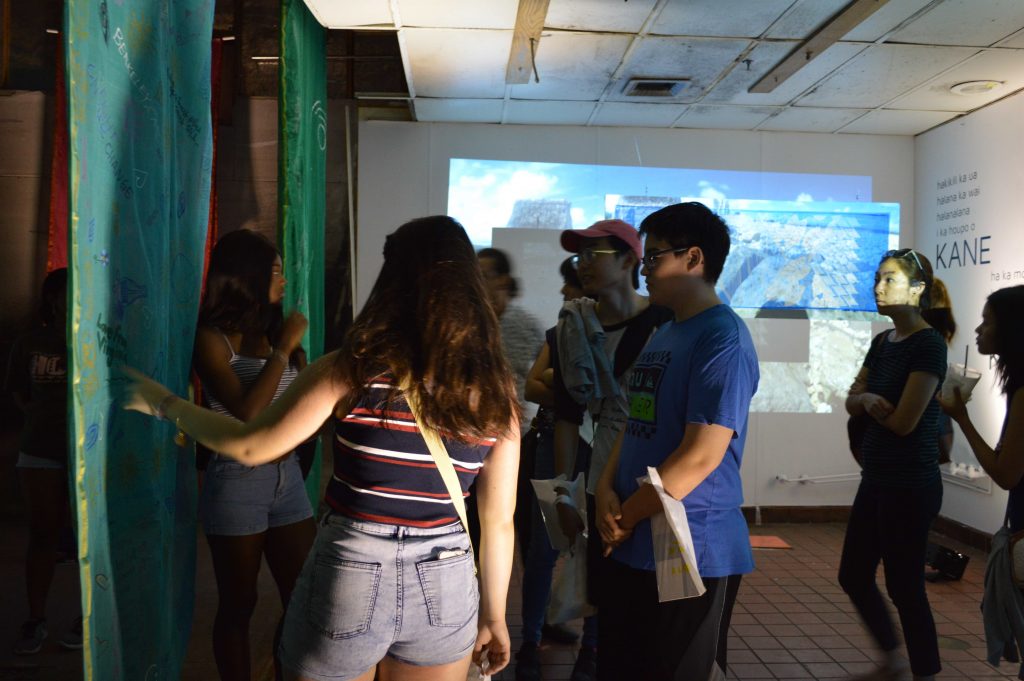 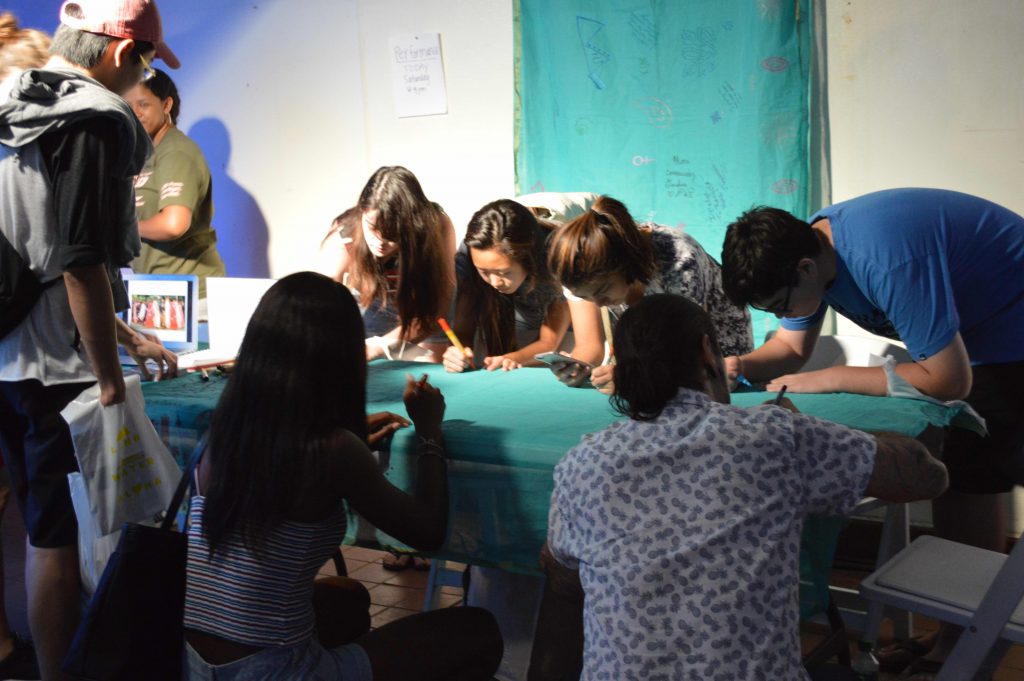