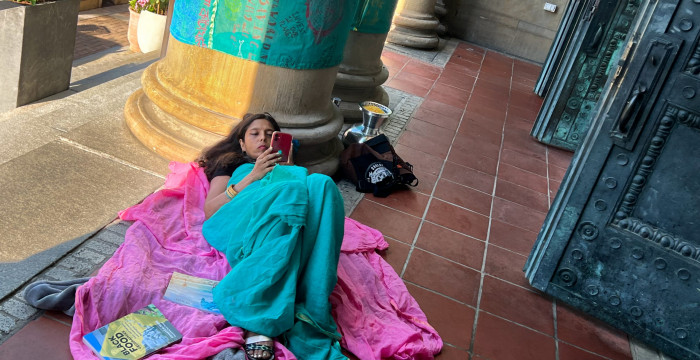 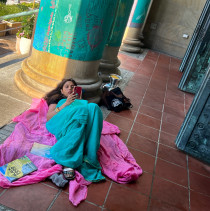 The SUSTAIN installation closed with a performance on June 9, 2022, which coincided with Transformer DC’s 20th anniversary party at The LINE DC. The SUSTAIN project celebrates 10 years of Storytelling with Saris, which began in 2012. For the performance, I did a flashback to my very first performance, which was called “Indelible Scent” and involved me in a bed reading and texting with the audience the passages I was reading. In the SUSTAIN performance, the audience was invited to write a six word poem inspired by the SUSTAIN saris and text the poems to me. I recited these poems as part of my performance, reading them from my phone. I also used my phone to activate the QR codes to soundwalks on site and responded to the poems and music for my performance. Here are some of the six word poems —

Sunlight peering through patterns of past

Inconceivable beauty unnoticed, how to remember?

Hopeful. Nature’s resilience. It fights back.

Here are some photos by Lucian Perkins.