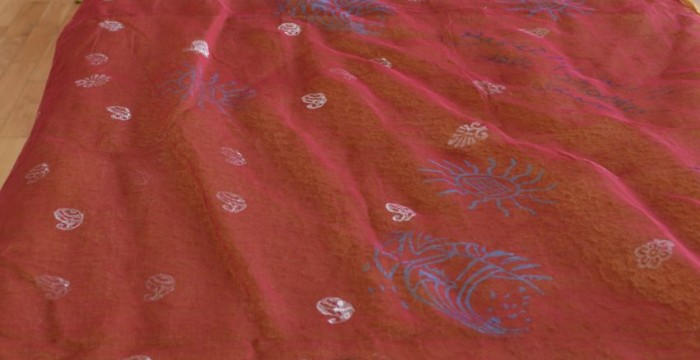 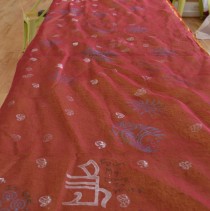 Workshop with Women from Shelter 202 comments

It was on a Thursday morning and there were only two other participants that day, so Alice and I spoke one-on-one for quite a long time. The workshop involves an audio visual component where I share stories about the women from my ancestral village in Bangladesh and the impact of climate change in that community. Alice seemed very engaged by the presentation and then really enjoyed learning the woodblock printing process. She told me that it brought back childhood memories of linoleum block printing in school art classes. She confided in me that she lives in a women’s shelter and is a domestic violence survivor. I shared that I have done advocacy work with domestic violence survivors and that some of my art is about violence against women. She then asked whether she could bring some of her friends from the shelter to do a workshop and see the show. I told her that they would be most welcome and that I could even do a special session for them.

The next morning I received a call from Elaine Johnson, the Education Coordinator at Calvary Women’s Services, a shelter in Anacostia. She told me that Alice had spoken to her enthusiastically about my workshop and had requested that the shelter schedule a special trip for the women residents. Because the women’s current location is confidential, I agreed to create a special closed workshop just for the Calvary women. I sent a link to the “Her Words: Storytelling with Saris” film that I made with filmmaker Nandita Ahmed, so that the women could watch it together in the shelter’s theatre before coming to the workshop.

On May 29 afternoon, we had a workshop for approximately 24 women from the Calvary Women’s Services shelter. Artist Amy Hughes Braden was luckily available to assist me that day, as it was one of the largest workshops I’ve organized. The Anacostia women had all seen the movie and were full of questions about the women from Bangladesh. They were excited to see the actual woodblocks and identify the corresponding matching prints on the saris hanging in the gallery. Because of safety concerns, I was not allowed to take any photographs of the women, but I did capture an image of the sari that we completed that day. The women from the shelter were touched that the sari they were printing would be worn by one of the women from Katakhali that they had seen in the film.

Although the size of the group made it difficult to have a lot of individual conversations, I did sit in a circle with several women to talk about climate change. They were amazed to hear about the Katakhali women who taught me about solar power and knew that in three years her investment in solar panels would pay for themselves. One woman expressed natural surprise at the global reach of climate change, asking “How is it possible that what we do in this country can affect people as far away as Bangladesh?” Another woman spoke about how much energy is wasted by office buildings and government agencies, remarking: “The Department of Commerce has a monthly electricity bill of $35,000 because they NEVER turn off the lights! That is a crime.”

Currently the women are in transitional housing and have limited means, so their impact on climate change is not great. However, almost all the women still made pledges on the saris to reduce their carbon footprint, promising to “Walk more” and “take the time to turn out the lights.”

The women were a diverse group, with different life experiences . They were mostly African-American but several of other backgrounds and some from outside the DC area. I was truly moved to speak with them and work together on the sari, connecting directly with women on the other side of the globe who are also fighting gender discrimination and poverty.