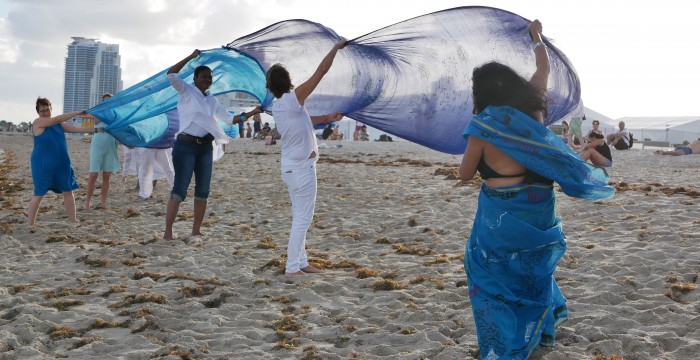 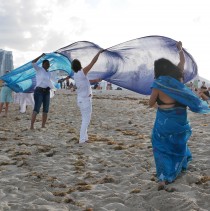 Rising Up in Miami Beach

The climate art action RISING UP took place on December 7, 2018 and included the participation of several women who have been in multiple performances with me (starting with Jalobayu in 2014) as well as a number of women who joined for the first time. It also included Kalidas Karmakar, a Bangladeshi artist and pioneer of performance art. Meredith Weil and Anita Havel added a dance and aerial yoga element. New blue saris were obtained from Bangladesh, and Diane Adkins and her partner Peter picked a huge number of coconuts from their tall Miami Beach coconut tree on the morning of the action. The saris were covered in woodblock printing, painting, and writing about climate change and the environment by people from Bangladesh, Washington DC, Paris, Athens, and Miami. It was an unforgettable experience for me to work with everyone, coming together so beautifully on a sunny but very windy day. I am grateful to everyone for their hard work on this project, which included many weeks of planning and preparation via email, text, and phone calls. — Monica

Statement: RISING UP is a collective response to climate change, using saris from Bangladesh, wind, sand, water, and materials found in Miami Beach. Bose collaborates with women from Miami and her ancestral island village in Bangladesh to create a transborder link between coastal peoples. Women’s leadership is key to addressing climate change and reducing our use of fossil fuels. A massive sea colored sari with handwritten climate pledges moves from the art fair to the rising sea. RISING UP includes singing, writing, movement, and references to women’s leadership in art and governance.

Location/Details: Starting at Superfine! Miami Beach art fair at the Art Deco Welcome Center, moving out to Lummus Park, and then the beach and ocean. Duration two hours.

We begin with tortured movements like the storms, winds, extreme heat and fires that are consuming our planet. We lay out on the floor several hand-woven Bangladeshi saris covered with woodblocks and pledges to reduce our carbon footprint. As I sing the Bengali song Kharobayu Boye Bege (with some feminist changes), we sew the saris together into a long train, and then lift the blue sari water slowly like the sea is slowly rising. Outside, we write fresh promises to protect the earth on a sari, dance and hang from trees to underscore their importance in reducing carbon, and carry green coconuts to the beach to symbolize climate resilience. We make a circle with the blue water sari, creating an island like Miami Beach and Barobaishdia Island, Bangladesh. I scatter rice, dal, and salt in the air, on the sari, and in a bowl of water, referencing food insecurity and salt incursion caused by climate change in coastal areas. I write “Women demand no carbon” with turmeric and water on a piece of white sari, using a Muslim ritual of hope. The seagulls follow the white sari cloth, dancing with us. I add turmeric (signifying renewal, cleansing, and detoxification in Bengali and other cultures) to the bowl of water and pour it into the rising sea. We take the massive blue sari and hold it parallel to the ocean and lift and swoosh the sari like a big wave and slowly lift it from the ground like the rising sea until our faces are covered. I enter the water and beat back the waves with a pink sari. We all take turns bailing water out of the sea with the blue bowl. We hoist a pink sari sail in the ocean. We end by each releasing a green coconut into the ocean. The coconuts float.

At various points, Juanita leads us in singing “The Times They Are A-Changing by Bob Dylan (which was about Vietnam but also appropriate now for climate change):

Come gather ’round people
Wherever you roam
And admit that the waters
Around you have grown
And accept it that soon
You’ll be drenched to the bone.
If your time to you
Is worth savin’
Then you better start swimmin’
Or you’ll sink like a stone
For the times they are a-changin’.

Come senators, congressmen, please heed the call Don’t stand in the doorway
Don’t block up the hall
For he that gets hurt
Will be he who has stalled
There’s a battle outside
And it is ragin’.
It’ll soon shake your windows
And rattle your walls
For the times they are a-changin’.

Previous : [ Mention in London FT ] • Next : [ Article in the Establishment ]