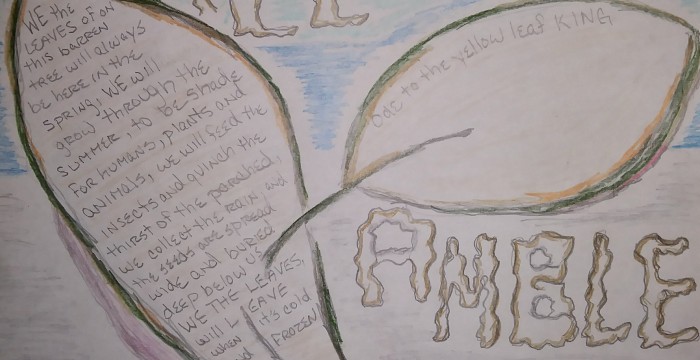 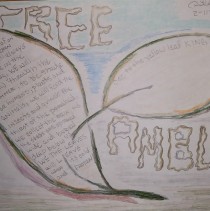 On the 11th of February I attended the Concrete Dreams Poetry and Art workshop on Zoom. We started off the workshop with a short introduction, with everyone saying their names and one word they were feeling. The words were: anticipation, humility, grateful, happy, healthy, free, excitement, peaceful, enthusiastic, stillness, homo sapiens, relaxed and eager. Next, Monica gave an introduction to what we were doing and outlined the Concrete Dreams project showing photos of previous saris as well as photos of the DC Arts Center.  Our workshop was streamed on Facebook and the video is here.

The theme for this month’s workshop was climate justice. Climate injustice revolves around the idea that there is an unfairness on the impact of climate change. The effects of climate change are being felt much more heavily by people from lower income backgrounds, people of colour and women. As well as this, many western countries produce large amounts of carbon emissions (with the USA and Canada producing the most carbon emissions per person in the world) without being the ones who are suffering the worst consequences of the earth’s rising temperature. Climate change, racism, and the patriarchy are all issues interlinked and contribute to each other. Climate injustice is rooted in colonialism, with Europeans looting and exploiting other countries and people around the world, without a care for the African, Native American and Asian communities and nations and the environments they were harming. This helped me think about climate change in a different way. I had often thought about it as humans vs earth, with all humans exploiting ecosystems and natural resources for their own personal gain. However, the workshop made me realise that the majority of emissions and climate change are produced by a smaller group of people in a western countries, and that its negative impacts are having detrimental effects on humans in the USA and the rest of the world. This also encouraged me to think more carefully about activities I participate in with high carbon emissions, such as unnecessary clothes shopping and driving, as my actions were not only having negative effects on other ecosystems, but they are having impacts on people in my own country as well as many people in many other countries across the world.

Monica then shared with us documents from the 1992 Rio Declaration, which was adopted at the Earth Summit. I was born in 2003, and the only other climate agreement that I had ever heard much about was the Paris Climate Change agreement of 2015. Thus, it was interesting for me to see that governments have been creating promises to properly address the issues of climate change since before I was born, and most of these promises haven’t been stuck to. Principle 5 stuck out to me most ‘All states and all people shall cooperate in the essential task of eradicating poverty as an indispensable requirement for sustainable development, in order to decrease the disparities in standards of living and better meet the needs of the majority of the people in the world.’

Before we went on to the poetry writing, we had a short breathing exercise, where we breathed slowly whilst tapping our face, temples, jaw and heart for a minute. Then finished by giving ourselves a big hug. The tapping cleared my mind and the hug uplifted my mood.

After this, Moumita Nabila, joining us from Dhaka, Bangladesh, shared the beautiful saris with us, and explained the long process it took to get them due to the COVID-19 restrictions. She had to have the saris and printing inks delivered to her. Then they were taken by ferry boat to Katakhali Village. Monica was on the phone with the women there, choosing the woodblocks, colors, and designs. Thirteen women in Katakhali partially printed 18 saris. The saris were beautifully decorated with woodblock printing and painting of many symbols representing monumental changes to the world that had happened this year as well as others relating to climate change, such as: masks and eyes, the Capitol building, bikes, 2 degrees Celsius, solar paneled lightbulbs, and fish.  The saris will next travel to Washington DC, and the participants in DC will add poetry to the saris. We also heard from Matoara Begum from Katakhali, who joined via video call on Monica’s phone. She has been helping with the sari work. Because internet is very weak on the island, she could not join Zoom.

Maps Glover helped talk us through the poems we would be writing this week. He said that we are in a climate emergency and need to rethink our agreement with nature. He read out the Preamble to the U.S. Constitution as an example of an agreement that is poetic but that did not take the Earth (or Black people, or women) into account. Regarding our poems, we were given freedom to go in any direction we wanted, but the poems would be about our agreement and relationship with nature, and how we want to see that relationship evolve in the future. Moumita sang beautifully in Bengali whilst we worked on our poems.

At the end, many people shared their poems with the group. I loved listening to everyone’s poems and everyone’s unique writing styles. This was a wonderful experience and helped me think about climate change and its impacts in a very different way.