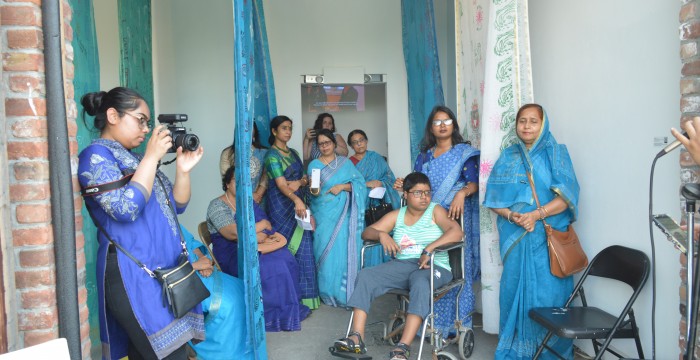 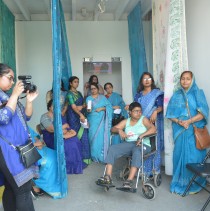 We took the bus together, starting in Kensington, Brooklyn, wearing blue saris to symbolize climate change. We walked in the blazing heat, we joined in a wheelchair, we sang, and we carried a sari banner covered in messages about climate change. We sang a feminist version of the Tagore song Kharobayu Boye Bege, on the bus and in the streets of Brooklyn as we walked to Open Source Gallery. The B67 bus had a ramp for wheelchair accessibility and we rode just a few stops to South Slope at 7th Ave and 19th Street. We were met at the gallery by other women from Kensington, Ifti of the Royal Bengal Tea House, and other supporters from across the city and even from DC and Chicago. At the gallery, we held a bilingual climate justice open mic. Ifti sang a beautiful Bengali song about climate change from the perspective of a crow. We all sang a series of songs together about storms and wind. People recited poetry and spoke out about climate change in Bengali and English.

We created a barrier reef on the sidewalk with oyster shells and alpana painting, referring to the Billion Oyster Project, which seeks to protect the New York City shoreline. My friend Sarah Porter told me about this project, and at our request, Monika Wuhrer (director of Open Source Gallery) collected the oyster shells from Governor’s Island. The oyster reef we built was really stunning.

Many people gave gut wrenching personal testimony on the impacts of cyclones in Bangladesh and hurricanes in the United States. We also added more drawings and writings to a blue sari. The day ended with a storm and a double rainbow — perfect for World Pride weekend in New York. I am so grateful to everyone who helped with the project and everyone who joined and took part in the closing climate art street action for Seven Minutes on the B67.

Sharing a few words posted by Chaya Babu on Instagram: “Iâ€™ve been thinking of the day we laid down oyster shells to create a mini barrier reef along a Brooklyn sidewalk with these Kensington ladies to honor those whose lives and homes have been lost, destroyed, or otherwise forever altered because of climate change in Bangladesh. Thank youÂ @mjboseÂ for making this little big project happen, and for the stories that were shared that day in the oppressive heat, in blue saris, about your family and others, of women clinging for dear life to coconut trees in the wild waters of ruthless tsunamis. Those words remain even as our paint washed away 🐚🐚🐚”

Previous : [ Subsistance project in Paris ] • Next : [ Article in Nari Magazine ]