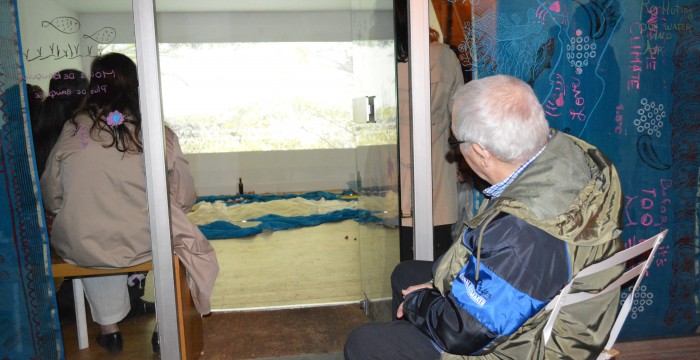 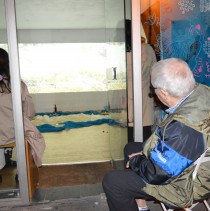 The SUBSISTANCE (Subsistence in English) project in Paris included a residency at The Window, an experimental gallery, and collaborations and engagement with dozens of people. The project looked at questions of consummation, agriculture, food, and climate change and involved collaborations between me, Monica Jahan Bose, and Catherine Bay (choreographer and artistic director of The Window), Indo-French artist Anju Chaudhuri and other residents of Paris as well as Washington-based filmmaker Leena Jayaswal. For the final performance, I collaborated with musician Nirina Lune and many others who joined the performance.

While in Paris, I made a video with the help of Leena Jayaswal and Anju Chaudhuri, using rice, a plate, our hands, and some video of waterlogged rice fields shot by Matoara Islam in Katakhali, Bangladesh. Through a video and photo workshop I organized in early 2018, Matoara and five other women in Katakhali learned how to film and received three cameras to share and document climate change and their lives.

The installation in the gallery and vacant restaurant across the passageway included 90 lbs (40 kilos) of rice, dal (lentils), vegetables, plates, saris covered in climate imagery and writing, and works on paper that Anju Chaudhuri and I made together in her studio in Paris. The opening reception was on June 1, 2019, and visitors were invited to use window crayons to write or draw about climate change or the environment on the large window of The Window. The gallery was open everyday except Tuesday and there were discussions with visitors daily. On June 3, we had a “Tea and Conversation” which was attended by a diverse group, including artist Anne Ferrer, visiting students from Pakistan and the US, and many others. On June 6, we had “Tea and Sari Workshop,” including discussion with Georgie Morali, food expert and writer. On June 7, we featured a conversation between me and musician Nirina Lune, which was filmed. I also met off-site with numerous artists, farmers, and ecologists in Paris and Brittany. June 8 was the finissage and two performances, Water Resistance and Dalbhat.

All the food in the gallery was shared with the community.

Previous : [ Conversation with Nirina Lune ] • Next : [ Seven Minutes on the B67/Climate Street Action ]