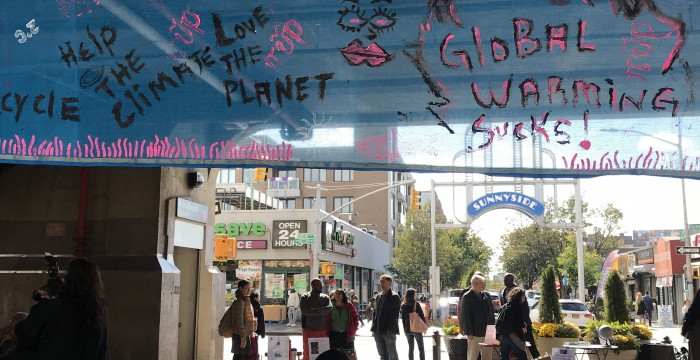 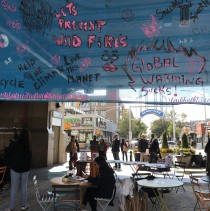 There was a surprising quality of bliss at this bustling plaza beneath the screeching 7 train at 46th Street in Queens where we congregated for the co-creation lab “Two Minutes to Midnight” organized and curated by artist Anjali Deshmukh. So many beautiful interactions and conversations were happening seamlessly as people passed through and paused at the plaza. People of all ages came through, many carrying children or shopping bags, and stopped to look , and then engaged with the artists and writers by sitting and listening to poetry or music, getting down on the ground to make interactive art, and join in various conversations about the future of our planet.

My project, “Two Minutes/Two Degrees” was an interactive installation, “a space of resilience, learning, and healing with handwoven saris from Bangladesh where we create a multilingual collaborative sari with your promises, hopes, and fears about climate change as we work together to cool down our planet and keep the global temperature increase below 2Â° celsius (and hopefully even lower- within 1.5 Â° celsius)”. I talked to so many adults and children and implored them to come up with solutions and add to my sari and my climate pledge journal. I created an island with saris and kanthas on the ground, the pink kantha from Kensington represented the islands of New York City and the blue and green saris were the water. Jayme helped hang two blue saris high across the plaza, using ropes that she tied between the stairs to the 7 subway train. They fluttered in the wind like kites beckoning people into our space.

Jesmin Ara are I met in Kensington, Brooklyn earlier this year. She came yesterday with two fresh poems about climate change, one in Bengali and one in English. She shared them with everyone during the open mic.

There were many young children who did not know the words “climate change” and I had to explain it to them and try to have them understand what we need to do as a society to move away from burning fossil fuels. Families speaking Burmese, Korean, Bengali, and Nepali.  Parents wanted the kids to just draw anything, but I got down on the ground with them, looked in their eyes, and talked to them about our planet and what is going on with climate change. Many children pledged to watch less tv and play outside more or to urn off the lights when they leave their room. I’ve lost my voice from all the talking with our co-creators, but its a sweet silence because the conversations had a purpose.

And it was a special thrill to reconnect with two women from 20 years ago when I was involved with Sakhi for South Asian Women, and to see so many of my sisters from SAWCC as well.